“YOU CANNOT REAP WHERE YOU DID NOT SOW”: A MESSAGE TO FELA DUTOYE AND HIS CO-TRAVELERS BY DR JAY OSI

I first met Fela Durotoye, FD as he is popularly called in August of 2017. This meeting was brokered by Pastor Jim Bent who was introduced to me by Naseer Daura the erstwhile Interim National Secretary of ANN. I later found out that Jim and Daura have been friends from their days in the Nigerian Military School.

My meeting with FD took place in my hotel room at the Four Points by Sheraton Hotel. This meeting that I thought would be a one-hour exploratory discussion to my amazement, started at 8pm and ended at well past midnight! After that meeting I was perplexed trying to make sense of all what we discussed. Two things that I could take away from that meeting was that FD wanted to court my friendship as a way of guaranteeing the ANN ticket and that he believes he is on a spiritual journey that had been ordained by God so he set out to bamboozle me with all sorts of revelations and prophesies to make me have no choice than to offer the ANN ticket to him right there and then. A couple of weeks after this, we had another meeting in the same location and followed the same pattern. The only difference this time was that he asked if I had presidential ambition to which I replied that my focus as at then was to build a credible platform that he and others can contest on to realize their various ambitions. As a follow up to this meeting we agreed to have a meeting of our teams in Abuja. To this day, that meeting is the most embarrassing meeting I have ever attended because one of our founding members at the time in the person of Prince Adebola Adekoya thoroughly embarrassed FD which I felt wasn’t necessary. His grouse is that FD does not have what it takes to be president and that he is not welcome to join the party.

A follow up meeting was hosted by FD and his team in Lagos and I attended with Onome Ojigbo our Lagos State Coordinator at the time, Samuel Ajayi our adviser on Media and Strategy and Olumide Olutayo one of our strong members in Lagos. One of the next steps following that meeting was the need for Team FD to fuse into the party and to start attending ANN meetings with other members. Another action point was the setting up of the ANN state secretariat which FD promised he will provide. Till this day, that promise is yet to be kept. In fact, the secretariat we currently have in Lagos was donated to the party by Olumide Olutayo! The first sign of FD’s treachery was, rather than work with our Lagos Coordinator to strengthen the party, he attempted to poach Samuel Ajayi who he had identified correctly as the architect of our media campaign, by aggressively following up with him to device media strategies for him and placed him on a retainership of five hundred thousand (500,000) naira monthly. If Sam wasn’t a loyal and trusted friend I wouldn’t have known about this because he told me about it, showed me the check, and he was shocked to find out that FD didn’t inform me about this before engaging him. One of the other things discussed in the meeting and some other subsequent ones were the roll out plan of FD’s presidential aspirations. All this left me with the feeling that all what FD was about was projecting himself as the undisputed candidate of ANN. Subsequent events were to confirm this.

Now, all these meetings and discussions were going on while we were still pursuing the party registration by INEC. In October 2017, we received notification from INEC that they will be coming for verification of our application and this includes assessment of our secretariat. As at then we had yet to complete the fit-out of the secretariat. I reached out to FD for support and he managed to send in a total of One Million, Seven Hundred and Fifty Thousand Naira in three tranches over a 2-day period. TILL THIS DAY, THAT IS THE ONLY CONTRIBUTION FD HAS MADE TO ANN!

Another issue of concern for most members of ANN including myself was the issue of accessibility or otherwise of FD. He doesn’t pick calls neither does he return calls. He responds to messages sometimes after 72 hours. I made several appeals to him, cajoled, shouted and sent people to talk to him on the need for him to support the party and the platform he wants to run on, but all these were to no avail. Instead, he went about trying to undermine the party. Installing people in state party executives and even in my office to advantage himself. Even Daura confessed to me that he was approached by Pastor Jim Bent to do all he can do from the inside to ensure that FD gets the ANN ticket. As part of this grand plan, Jim approached me offering a proposal to provide security and protocol services for the party.

By January of 2018, it became very evident that the relationship between FD and ANN was doomed to fail and I personally had made up my mind to move on. However, with intervention by some concerned individuals like Samuel Ajayi, Dr. Dale Ogunbayo and Greg Aduda, I agreed to have a meeting with FD once again. The meeting was very candid, and I told him my mind especially how he tried to poach Samuel Ajayi from the party. He apologized for that and he also raised his own concerns. Again, the issue of funding for the party was raised and he promised to do something about it. Of course, he didn’t but went ahead to publicly declare his membership of ANN on February 22nd. An accident involving FD’s wife happened on that day at the party secretariat and she was promptly attended to by Dr. Shola Olutayo, Olumide’s wife who is a specialist in medical outreaches having worked with several multinationals. The report that got to me subsequently was that having realize Dr. Olutayo’s skillset, FD attempted to poach her to work for him and she referred him to the party.

So, consistently, FD have been trying to steal from the party in a bid to steal the presidential ticket. Tell me, how is he different from the people he has been lampooning? The only positive we got from FD as a party is the increased awareness and influx of new members at the time he joined. But all that was negated by the fact he never allowed those people to be fully integrated into the party. In fact, most of them are not financial members of the party as all their donations are channeled to Team FD.

No amount of blackmail and propaganda by you and your team can shake me. I am purposed in my mind and my conscience is very clear. You know in your heart of heart that I have put in my all to bring ANN to where it is today. I will be addressing the issue of the failed hijack of the party by some powerful forces who you are working with in subsequent releases. 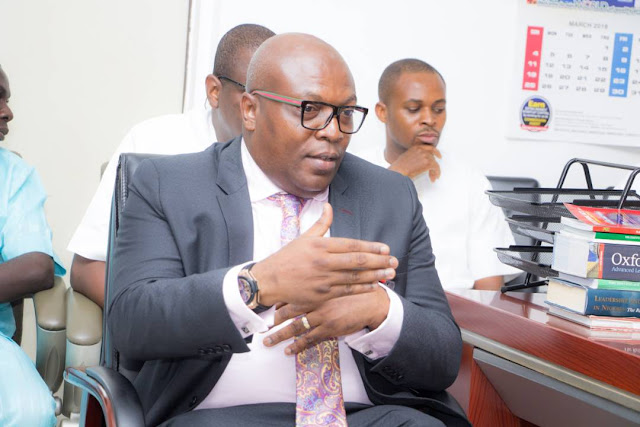