IRI JI MBAISE IS TODAY, 15TH AUGUST FOR THOSE WHO DID NOT KNOW

Mbaise came under British rule in 1902 during the Anglo-Aro War , when the British Aro Expeditionary Force subdued the Aro Confederacy in Owerri and Mbaise.

By 1906, at the conclusion of the operation, present-day Mbaise was united under British control with some local autonomy.

To supervise the clans, a native court was established in Obohia in 1907 and transferred to Nguru in 1909.

In 1929, the Nguru court was destroyed as a result of the Igbo Women’s War . Regional courts were then opened in Obohia, Itu, Ife and Enyiogogu in response to the home rule movement of the 1930s. The region was united as a political and administrative unit in 1941. Councils were formed by 1945, loosely based on autonomous communities.

Until Europeans arrived in Nigeria, Mbaise’s main source of income was subsistence agriculture. In Igboland, government was based on kinship and customs. The village group (a weekly gathering of men) was the highest level of organization, with the amala in power.

When the British colonial administration was introduced in the Southern Protectorate of Nigeria, the government established a native court at Nkwogwu Nguru in 1905 and built a residence for the British there. Dr. Rogers Stewart, who took a wrong turn on his bicycle, was captured and killed in a case of mistaken identity.

The 1906 Ahiara Punitive Expedition, led by Captains Brian Douglas and Harold Hastings, began reprisals in the region. In 1927, the colonial government introduced taxation. Taxes were increased in 1929, and the Women’s War began to protest social and economic oppression. The native court at Nkwogwu was destroyed and the governor’s residence was sacked. Courts were established in Itu (for Ezinihitte); Afor Enyiogugu (for Agbaja); Obohia (for Ekwerazu); Orie-Ahiara (for Ahiara); and Uvuru (for Oke-Uvuru).

On June 12, 1941, Mbaise became a federation of five clans: the Agbaja (Nguru, Okwuato, Enyiogugu, Obiangwu, and Umuohiagu), Ekwerazu, Ahiara, Ezinihitte, and Oke-Uvuru. A treasury was opened in Enyiogugu in 1942, and was transferred to Aboh in 1948. Obiangwu and Umuohiagu, which had been parts of Agbaja, joined Ngor Okpala in 1957. Mbaise now had three local governments: Ahiazu, Aboh-Mbaise, and Ezinihitte. Between 1955 and 1958, the Mbaise County Council began two landmark development projects: Mbaise Secondary School and Mbaise Joint Hospital (now General Hospital), both in Aboh .

The people are predominantly Igbo. About 90 percent are Catholics, and Protestants and other religions make up the remainder. Some cultural and traditional ceremonies have survived Western influence. The eight-day Ahianjoku festival honored the yam deity; since 1946, the annual August 15 new-yam festival has been a Christian version of the Ahianjoku festival. Oji Ezinihitte celebrates the Ezinihitte on January 1 each year. Itu Aka, before the farming season, encourages the people to weather the environment, modernity and new challenges. A local salad, ugba , is served with raffia wine .

Mbaise women are noted for their fertility. To be an eghu ukwu, a woman must bear at least 10 children; some women have given birth to as many as 15 children.

Eseike , esse , ekwerikwe mgba and nkwa Ike are performed at funerals of men, and uko and
Ekereavu for funerals of women. D. I. Nwoga, who brought an abigbo group to the United States during the 1980s, wrote that the musicians and dancers philosophize, criticize, admonish and praise with their performances.

By
*Daniel iheanyi*
*Most influential*
May una help me blog abeg 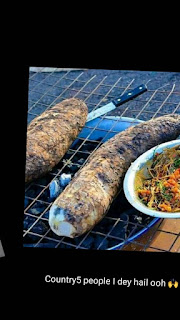 Catholics :16 Percent Of The World’s Population Celebrates The Assumption Of The Mother Of Jesus Christ Today

YOU ONLY LIVE ONCE, Y.O.L.O// COMR. SHEDRACK UGWU

YOU ONLY LIVE ONCE, Y.O.L.O// COMR. SHEDRACK UGWU