Speaking during a dialogue session organized by Ripples Nigeria in Lagos, Soyinka said if the Indigenous People Of Biafra (IPOB) could earn the terrorist organization tag from the Buhari led federal government, there is no reason why the Miyetti Allah (umbrella body of herdsmen in Nigeria) shouldn’t be slapped with a similar label.

“Our Minister of Defence shot himself in the mouth when he made excuses for the herdsmen by saying ‘what do you want them to do when squatters are sitting on their land?’ It is very shameful that the Minister of Defence is still serving in Buhari’s government”, Soyinka said.

In an hour long speech which he titled from ‘Miyetti to Haiti; Notes from a solidarity visit’, Soyinka couldn’t hide his disgust over what he considers excuses being made for the marauding herdsmen.

The drying up of the Lake Chad has been blamed for the violent inclinations of the herdsmen, but Soyinka is having none of it.

“When I read of untenable explanations like Lake Chad is receding…water is drying up….I don’t want to hear of all these ridiculous excuses. Nature has been kind to us. We don’t have earthquakes in Nigeria”, Soyinka lamented.

The Nobel laureate said during a visit to an earthquake ravaged Haiti, herdsmen had no sticks nor AK-47s. He wondered why the herdsmen roaming Nigeria have been allowed to bear arms.

Soyinka has been very critical of the Buhari administration and its handling of the security challenge bedeviling the country, in recent times. 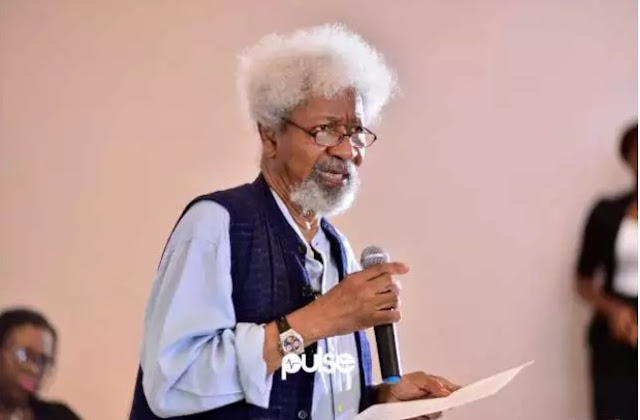