What Liberia’s President, Weah Said About Super Eagles After Playing Against Them For 79 Minutes

George Oppong Weah, the President of the Republic of Liberia, has hailed Nigeria as a great and worthy ally in national development and also described Nigerian football as a model that he would want his country to follow.

According to the News Agency of Nigeria, NAN, the Director of Communications, Nigeria Football Federation, Ademola Olajire, said on Wednesday in Lagos that the football icon spoke after the Tuesday night’s exhibition match between the Lone Star and Super Eagles at the Samuel Kanyon Doe Sports Complex in Monrovia.

“As a young, upcoming footballer, I was always fascinated by Nigeria’s football stars. I looked up to the likes of Stephen Keshi, Rashidi Yekini, Friday Ekpo and others.

“I believed that the African footballer can also get to the very top. I believe that in Africa, somewhere, there is another Ballon D’Or winner.

“We have to find him, expose him to the world and give him the opportunity to actualise his dream,” a statement by Olajire quoted Weah, African, European and World Footballer of the Year in 1995 as saying.

Weah commended the Federal Government, Nigeria Football Federation and the Super Eagles for the honour done to him on the occasion which was to celebrate his contributions to Liberian football.

He revealed that as a people, Liberians look up to Nigeria’s pedigree in the round leather game and will work hard to get there.

Weah and former national teammate, James Debbah led the Lone Star against the Super Eagles in a game played in an ambiance of warmth, mutual respect, and good spirit.

Henry Onyekuru and Simeon Nwankwo scored for Nigeria in the first half, while Liberia reduced the deficit through a penalty kick in the second half when Oluwasemilogo Ajayi handled the ball in the box. 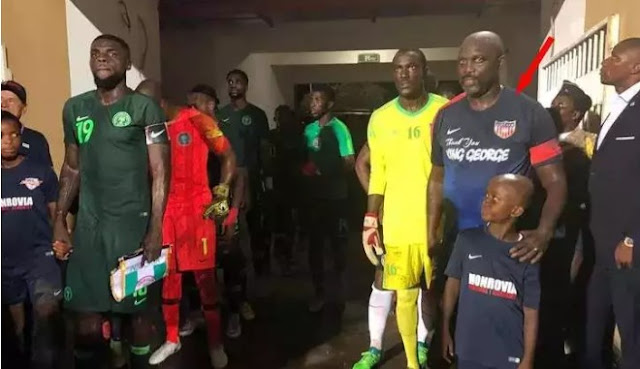