Having found our colour which was one, to vary.
A part of the African soil is now left to some boars whose history was characterized by discrimination, violation of human rights, apartheid, struggles for freedom, migration, and conflict between and among ethnic and racial groups amongst other issues.

This boars kill our own in their land.
I thought we’re one.
We all fought there nightmares together.
What’s the message?

Oh Daddy Bob and Dube, was this the message?
We all left Babylon for Egypt.

Daddies, where is the Africa you all died for?
The black ground you all used blood to unify, is now divided with blood.

People starting wars every time they want.
Some for their rights,
Some for fun and their own glory.
Letting people die for the wrong that they do
Oh it’s painful!

Could someone help me render a dirge to Africa?

All sitting arms folded,
One day, the river will overflow and there will be nowhere to go,
We all would run crying, wishing we had put out the  fire. 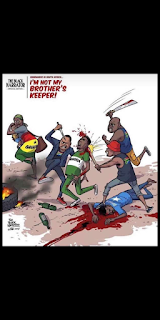 Brief History Of ZAMABODAH, How It All Started (photos)