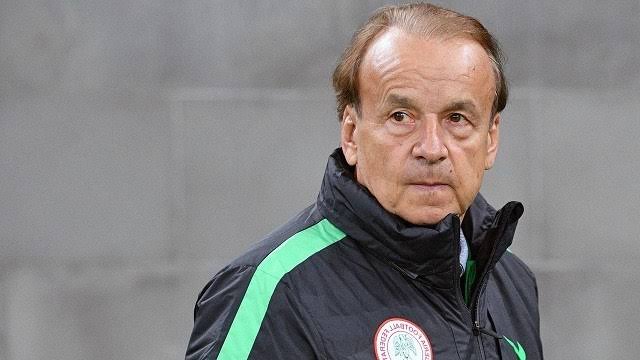 The recent face-off between the Nigeria Football Federation and Super Eagles coach Gernot Rohr has taken another dimension after it was revealed the gaffer was angling for an extension to his contract which expires in seven months.

Rohr got an extension to his contract before the 2018 FIFA World Cup, a move many felt was in the right direction but things have turned sour between the Federation and the coach.

The crux of the matter is unpaid salaries and allowances and even though Rohr has not publicly complained about it, sources within the NFF has said he is unhappy and might leave.

Rohr has neither confirmed nor denied the rumour but it is evident that the once beautiful relationship between Rohr and the NFF is now frosty.

With the start of the 2021 Africa Cup of Nations qualifiers by the corner, I think it is time the love affair between Gernot Rohr and the NFF comes to an end.

Something has to give, we can’t start the qualifiers in this manner.

Here are three reasons I think Rohr should take a walk.

Rohr has not won anything with the Super Eagles.

This a fact and I am not sure anyone will disagree with that. I have seen coaches sacked for lesser reasons but Rohr seems to have some hold on the powers that be.

A first-round exit from the FIFA World Cup did nothing to enhance his reputation and then the third-place finish at Egypt 2019 didn’t exactly soothe frayed nerves.

To put things in perspective, the last time Nigeria was at the Nations Cup prior to Rohr’s arrival, the title went back to Abuja. At Brazil 2014, Nigeria, with an arguably less talented side, (with due respect to the class of 2014) got to the second round and gave France a run for their money before bowing out.

Rohr’s ‘spreadsheet’ at the 2018 World Cup and 2019 Nations Cup did nothing to enhance his reputation or even improve on past World Cup and Nations Cup appearances. He has not delivered as he promised he would.

No love lost between Rohr and the NFF

It has been clear for some time now that Rohr and the NFF are just papering the cracks in their relationship. The Franco-German isn’t happy that the NFF have no made his salaries and allowances a priority while the NFF blame the situation on lack of monies from external sources responsible for his salaries.

That excuse has apparently not hit a right chord with Rohr and even though he has not publicly said so, there have been rumblings from his camp related to payments.

Every worker should be paid his dues and Rohr is no different but if they can’t find common ground the divorce might just be an option.

I am not privy to Rohr’s contract but I think there is a way out of this unnecessarily bickering. Rohr should take a chill pill while the NFF raise monies due to him or he should resign and sue the NFF for breach of contract.

Again I am no lawyer and I haven’t read the contract the NFF entered with Rohr but common sense should prevail here.

The Super Eagles brand is bigger than Rohr or the NFF and the grass, in this case, should not suffer when two elephants fight.

Either they reach an amicable agreement or Rohr should resign and sue the NFF for breach of contract.

Rohr has taken the Eagles as far as he can.

I think Rohr has done his bit for the Super Eagles as I do not believe he can improve the team anymore. This might sound defeatist but I have always had this feeling since that ‘six minutes of madness’ against Argentina in the last group game at Russia 2018.

Lack of game management from the players and the bench caused us a Round of 16 slot and I must say it was painful to take. Rohr

We had our destiny in our hands but we somehow contrived to throw it away. It would not be the last time such will happen as Rohr’s tactics and substitutions have left a lot to be desired.

The group stage game against Madagascar (The Eagles lost that game 2-0) was painful to watch and it clearly showed Rohr’s lack of understanding of his squad or maybe he just does not have it anymore in him to deliver the Eagles he promised.

Nigeria’s game with Algeria in the semi-final of the 2019 Africa Cup of Nations is another prime example in Rohr’s inability to get over the line. With the game inching towards extra-time, we somehow managed to put ourselves in a compromising position. We were on the ascendancy after our equaliser but once again we allowed the game to run away from us.

It will be easy to blame the players but I think Rohr should take a chunk of that blame.

He’s done his bit for the Super Eagles and I thank him for that but I believe he (Rohr) has ran his race with the Eagles.

The news making the rounds right now is that the NFF won’t be renewing his contract. If that happens, I won’t say I will be an unhappy man. He’s got a lot of free passes for a long time and maybe this is the point where he calls time on his Super Eagles adventure.