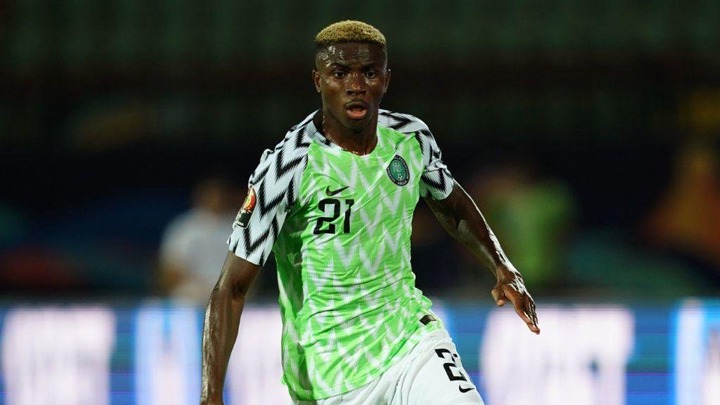 Nigeria are still searching for their first AFCON title since 2013, leaving fans disappointed.

Super Eagles players, however, shine regularly for their respective club sides. So, who are the best Nigerian footballers?

Based on ability, form, and potential, here are Nigeria’s current top ten players.

Troost Ekong has gradually improved to be a better player since joining Udinese. His capacity to recover in defence, excellent blocking ability, as well as accurate passing has seen him draw comparisons with great Nigerian defenders. His influence for the Italian side has been magnificent.

Ekong has 38 caps for Nigeria and has continue to display his leadership qualities.

Simy Nwankwo scored a beauty against Juventus in 2018 and caught the attention of Super Eagles coach, Gernot Rohr. He only had to play the World Cup preparatory game against DR Congo in Port Harcourt, to make the final list for the Russia 2018 World Cup.

Simy Nwankwo was a second half substitute in Nigeria’s game against Croatia and Argentina at the World Cup.

Gernot Rohr has opted not to include the lanky striker in the Super Eagles team since July 2018, but his exploits for his Serie B side, Crotone has been outstanding. He has won two Serie B player of the month award in 2019 and also scored nine goals this season with two assists.

He was between the sticks for Nigeria in five of the seven matches played at the 2019 African Cup Of Nations (AFCON) in Egypt.

Daniel Akpeyi has been massive for his South Africa side, Kaizer Chiefs, especially after the injury of Itumelang Khune, who was ahead of him in pecking order. He has won two man of the match awards this season.

An unexpected turn of a career for Chidozie Awaziem, who has always been on loan since joining Porto in 2016. Awaziem was probably a second choice option for Troost Ekong and Kenneth Omeruo prior to the AFCON 2019, before Gernot Rohr decided to play him at the full back position due to Abdullahi Shehu’s injury in the first game.

The 22-year old was impressive through the tournament which sealed his place for the National Team. He has been impressive for CD Leganes, despite the fact that, they are currently struggling in the Spanish Laliga Satandar

The 24-year old was the only player to start for the Super Eagles in every game at the AFCON 2019 and this confirms his value for Nigeria.

Etebo has been on top form for Stoke City, through their struggles in the Skybet Championship.

Peter Etebo is adept at breaking up play while protecting his defence. He is also versatile, a strong competitor, and comfortable in possession, adding to his value. The talented defensive midfielder – an increasing rarity in today’s game. With 33 caps for Nigeria, Etebo has developed into an unstoppable player.

Five goals this season for Peter Olayinka including the close range effort against Inter Milan in the Champions League. The 23-year old has shown why he is line to lead the Super Eagles attack.

Since signing from Chalrton Athletic for £300,000 in June 2019, Aribo has proven a real bargain for Rangers. He made an instant impact.

Aribo’s skillful ball play and consistent finishing has combined to produce a formidable midfielder. He has netted four goals and also had four assists for Rangers this season.

Joe Aribo scored in his first two games for the Super Eagles and looks like Nigeria’s big hope.

A top performer for both Nigeria and Leicester City. Wilfred Ndidi has never come short of his abilities since joining Leicester City in 2017.

He has added goalscoring to his game, which requires him to move forward more and try his chance at goal. He has scored twice for the foxes this season.

Samuel Chukwueze was exceptional for Villarreal in the 2018/2019 season as a rookie. He made his way to the Super Eagles and scored one of Nigeria’s goal at the 2019 AFCON. He has always been a decent player with a magical left foot, but the question is can the 20-year old maintain his form.

After the remarkable season with Royal Charleroi last season, Victor Osimhen has been touted to be the next big thing for Nigeria.

His move to Lille in the summer has unleashed some goal scoring abilities in him, having netted seven league goals for the French Ligue One side. He has also scored two goals in the Champions League this season.

Following Ighalo’s retirement from the Super Eagles, there were so many questions about, who was going to fill the void. Osimhen’s performance for Lille answered the question and with six games played for Nigeria so far, one can be convinced of the expectations towards the goal poacher.

Chwukueze To End Nigerias Wait For CAF Player Of The Year ?