The Orator becomes the masquerade

Entire community of Abia State University, Uturu was painted red on this day 17th of October 2019, in jubilation as ‘an orator emerged the masquerade’.
Abia State University, Uturu presents her 52nd Inaugural lecture by Ogbonna Onuoha (professor of Linguistics and Igbo) on the topic: “From Language wars to multilingualism as a tool for resource sharing in Nigeria”. Which is translated igbo as “si na ndorondoro baa na nsukorita asusu maka nkekorita ok na Naijiria”. Nkuzi nturugo nzere Okankuzi, agba nke iri-ise na abuo nke Mahadum Steeti Abia nke Ogbonna Onuoha.
The event kicked off immediately after the procession of the Vice Chancellor and his entourage of distinguished professors , nominal professors, lecturers, etc and the opening prayer said a clergyman as the breaking of kolanut was next and done by one of the Ezes present.
The Vice Chancellor, Abia State University Uturu; Prof. E. A Ikonne presented an opening speech. In his speech, he praised his students for their doggedness to their studies, comportment, and calmness during this examination period. He added that to the final year students who just concluded their examination that within the space of a month, their results will be published. He also celebrated the staff for their support in the “our story must change” mission.
The autobiography of the inaugural lecturer’s was read as many awards, titles, recognition etc were not obliviated.
At the course of the reading, it was observed that virtually everything about Prof. Ogbonna starts with the letter ‘O’. For instance, his name Ogbonna Onuoha and presenting his lecture in the month of October. The anchor with the consent of the Vice Chancellor stated publicly that his other name shall be ‘October’. So we have, Prof. Ogbonna October Onuoha.
Thus, the inaugural lecturer started off his lecture with a song  of Thanksgiving to God, followed by an appreciation to all in attendance. First, his immediate family of five (3 boys and 2 girls) down to others.
It would interest you to know that the inaugural lecturer now a distinguished professor presented his lecture in Igbo language intoto. This act according to the Vice Chancellor is a rare and unique one as this sort is actually the beauty of inaugural lecture.
At the course of the lecture, there was never a time he stumbled into either English language or any other language due to unfamiliarity. Instead, the presentation was scored high as he efficiently and effectively delivered his lecture.
The program drew all and sundry as the university auditorium was filled to it’s capacity with the honor and presence of the students, academic and non-academic staff, clergymen/women, Nsulu community/dancers, faculty of Humanities among others.
At the end of the lecture, he presented his inaugural lecture booklet to the Vice Chancellor who welcomed him to the class of distinguished professors by the gesture of award presentation as the culture which is a sign of graduation from being a nominal professor to a distinguished professor. Following were gifts trooping to him by his community of origin (who presented clothe materials etc while the women gave food items like plantains etc, women of Valor, his church, the faculty of Humanities which is his birthday faculty was not left out in the presentation of gift too, as they gave him a well articulated, artistically crafted portrait of him, etc. The event came to an end with a closing prayer still by a clergyman. 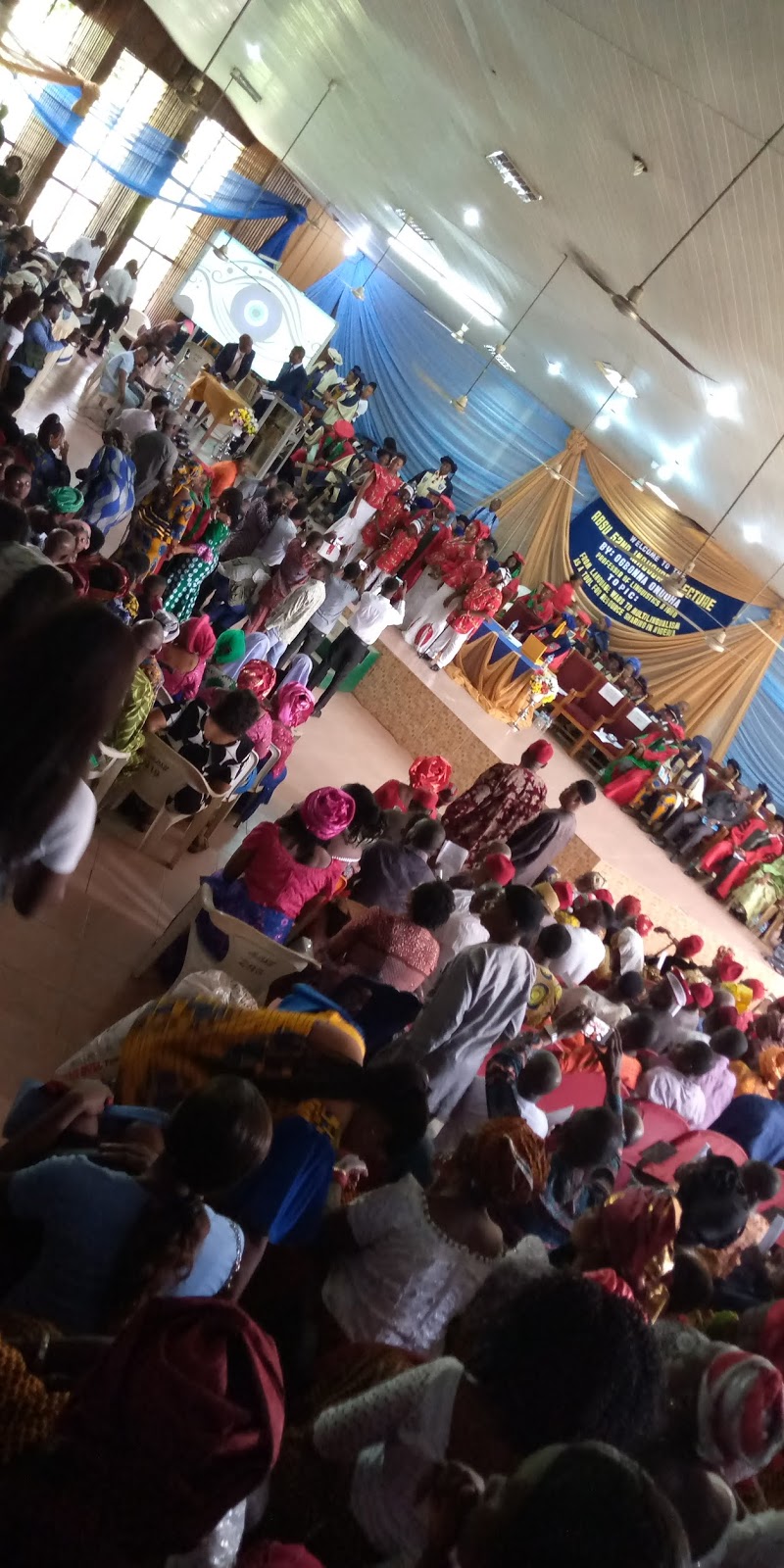 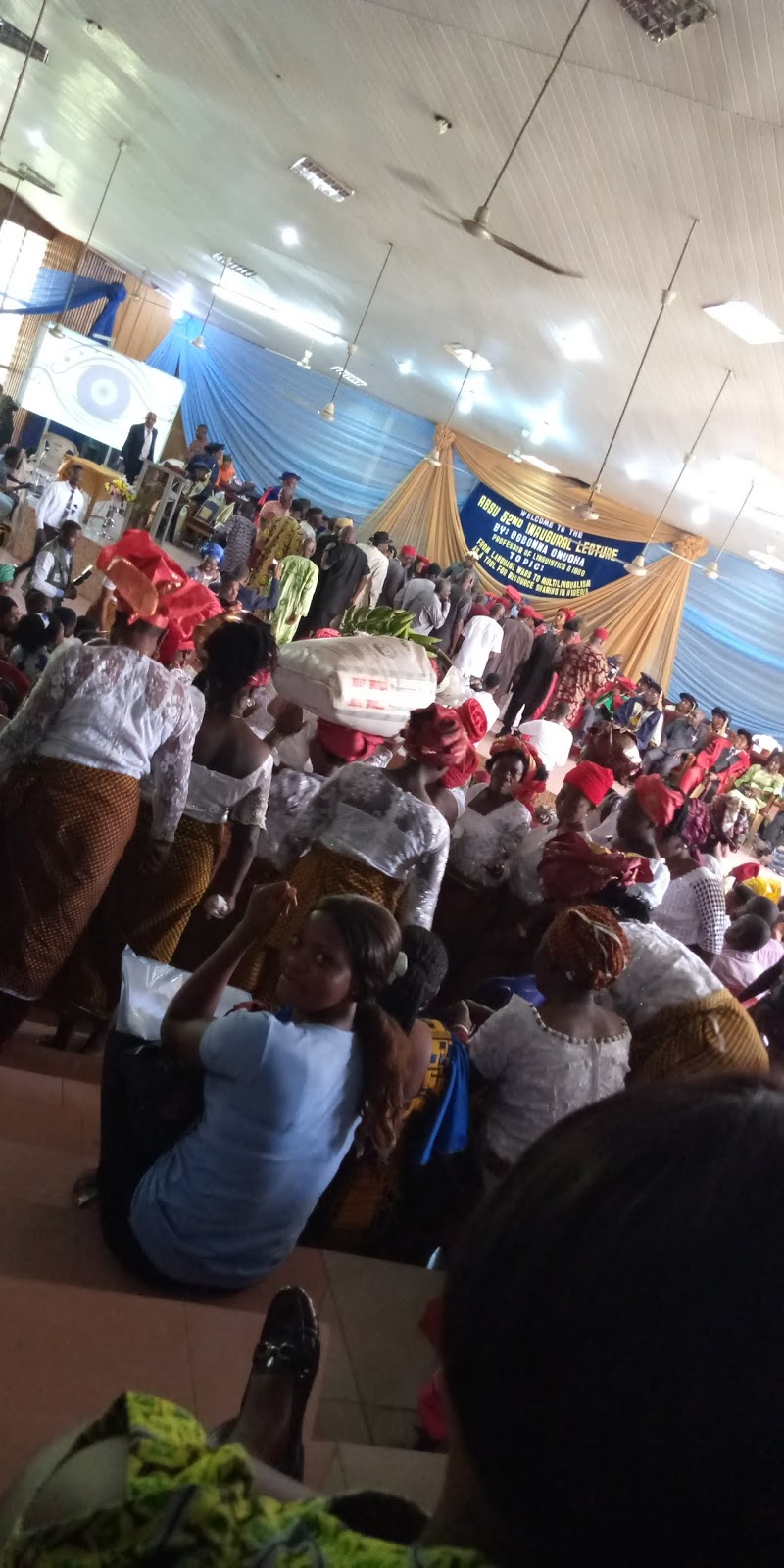 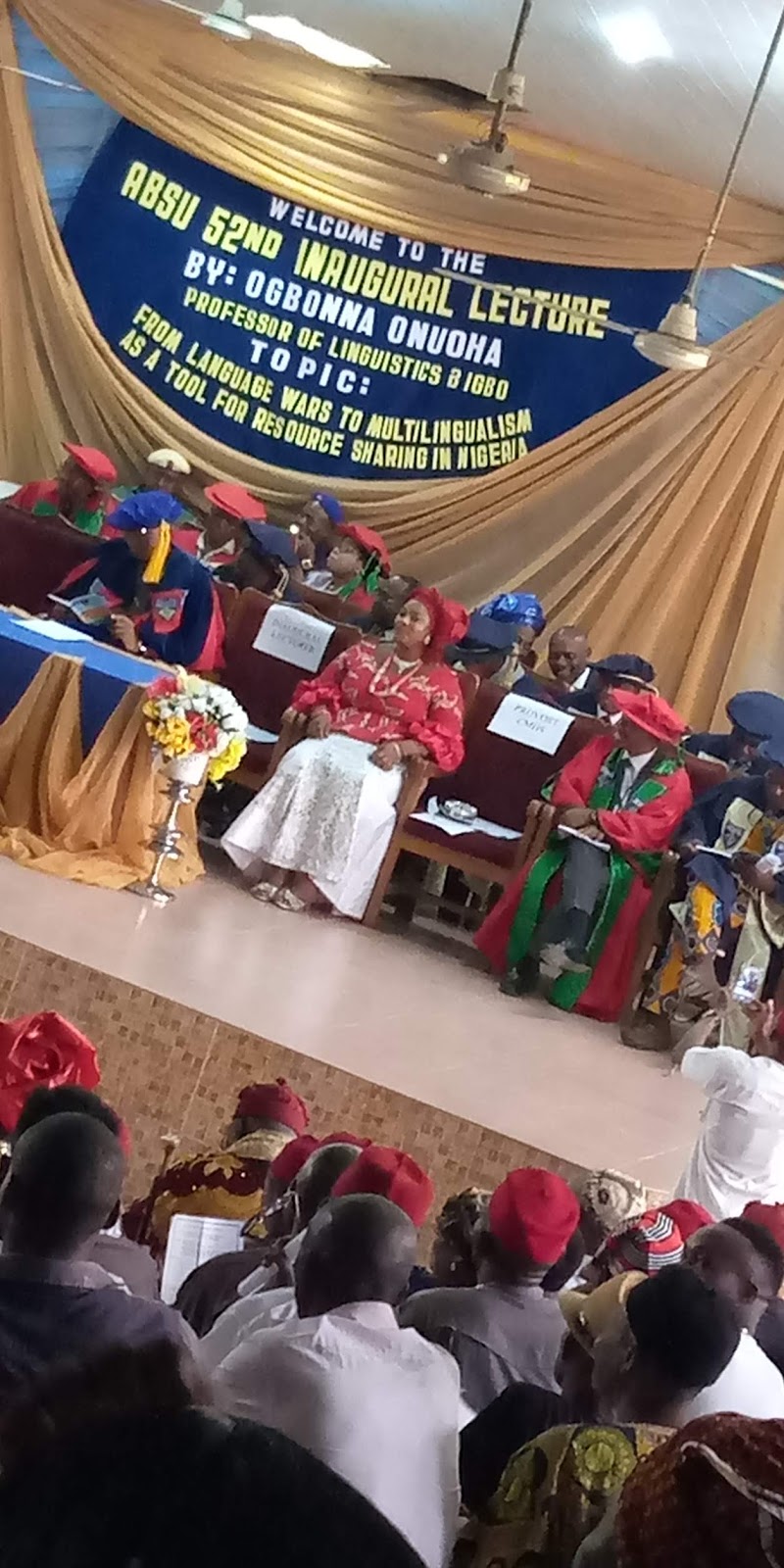