So, a national population census was supposed to take place in Nigeria in 2016 but due to the current economic crisis, the census have been postponed till further notice.

So in the mean time, Naijaloaded have gathered figures from various sources showing Nigeria’s most populated cities.

Many of you probably don’t know your various cities population the below data will keep you informed. Well, the data below is an estimation.

Lagos has been the most populated city in Nigeria for a longtime, in 2006’s population census Lagos had 7,682,953.

But now The population of Lagos according to the Lagos State Government was 17.5 million, a number disputed by the Nigerian Government and judged unreliable by the National Population Commission of Nigeria.

The latest reports estimate the population at 21,642,797, making Lagos the largest city in Africa.

Officially Lagos is known to be the second fastest-growing city in Africa and the seventh in the world. Our 2018 estimates puts the city’s population at 23,000,000.

Kano is a city in Kano state, which is the second largest city in Nigeria. The Kano urban area covers 137 km2 and comprises six local government areas (LGAs) — Kano Municipal, Fagge, Dala, Gwale, Tarauni and Nassarawa with a population of 2,163,225 at the 2006 Nigerian census.

The metropolitan area covers 499 km2 and comprises eight LGAs — the six mentioned above plus Ungogo and Kumbotso — with a population of 2,828,861 at the 2006 Nigerian census.

Following the recent estimates by the state government Kano can be said have increased by almost a milion with 3,626,068, Our 2018 estimates puts the city’s population at 4,828,861

Ibadan is the capital city of Oyo State and the third largest metropolitan area, by population in Nigeria.

In 2006 population census the city had up to 1,338,659 has the total population after Lagos and Kano, But as of recent report the city has a population of over 3 million,

popular estimation states Ibadan has 3,500,000 as of 2016 Ibadan is also the largest metropolitan geographical area.

At Nigerian independence, Ibadan was the largest and most populous city in the country and the third in Africa after Cairo and Johannesburg. Our 2018 estimates puts the city’s population at 4,500,000

Abuja is the capital city of Nigeria. It is located in the centre of Nigeria At the 2006 census, the city of Abuja had a population of 776,298, making it one of the ten most populous cities in Nigeria.

Abuja has witnessed a huge influx of people into the city; the growth has led to the emergence of satellite towns such as Karu Urban Area, Suleja, Gwagwalada, Lugbe, Kuje and smaller settlements to which the planned city is sprawling according to recent reports and estimates Abuja population is 3,000,000.

Port Harcourt is the capital of Rivers State, Nigeria. According to the 2006 Nigerian census Port Harcourt has a population of 1,382,592.

The state government have not made any public declaration on the city’s population as of recent, but different estimates have reported Port Harcourt having close to 2 million with an estimate of 1,947,000 as the total population of the moment.

Aba is a major urban settlement and commercial center in a region that is surrounded by small villages and towns.

Kaduna is a city and the state capital of Kaduna State in Nigeria, The population of Kaduna was at 760,084 as of the 2006 Nigerian census.

Maiduguri is the capital and the largest city of Borno State Nigeria, The city had 618,278 in 1991 census, and has since grown rapidly with a population exceeding a million by 2007.

OTHER CITIES AFTER THE TOP TEN ARE 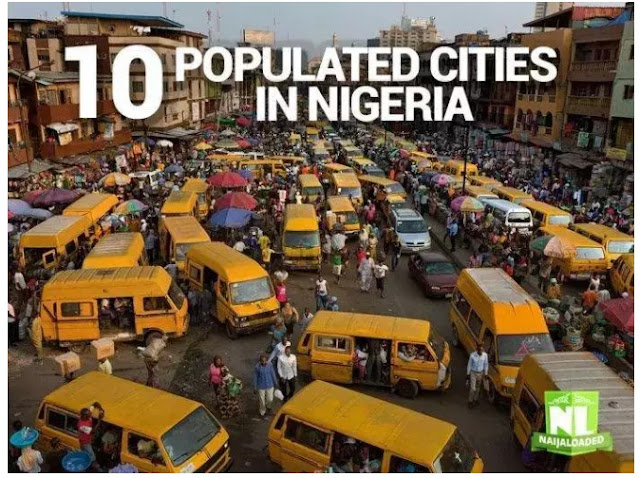