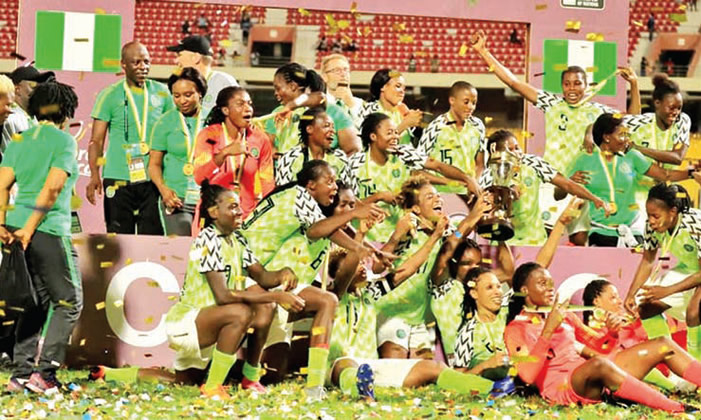 Nigeria has climbed to the 38th position in the latest FIFA women’s world rankings released on the FIFA official website on Friday.

The Super Falcons maintained their position as number one in Africa after amassing a total of 1,599 points and moving just one spot upwards from their previous 39th position on the 155 team rankings.

The News Agency of Nigeria reports that the ranking is coming barely three months ahead of the Women’s FIFA World Cup, which is scheduled to hold in France from June 7 to July 7.

The Super Falcons current position was boosted by their third-place finish at a four-nation invitational tournament in China and an impressive run in a 12-nation tourney in Cyprus.

The reigning African champions ended the competition on a positive note with two wins and two defeats after beating Slovakia 4-3 and trouncing Thailand 3-0 to finish on the seventh position.

Nigeria was followed on the rankings by Cameroon who maintained their 46th position with a total of 1,499 points, while South Africa dropped one spot to the 49th position with 1,485 points to finish third on the continent.

The United States remain number one in the world after amassing a total of 2,101 points, followed by Germany with 2,072 points.

England and 2019 World Cup hosts France swopped positions as the Lionesses with 2,049 points moved one step up the rankings into the third position, while Les Bleus with 2,043 points dropped to the 4th position.

Canada and Australia maintained their fifth and sixth positions, while Japan and Netherlands swopped places to finish seventh and eighth, respectively.

Sweden and Brazil maintained their positions to round up the top 10 teams in the world.

The 8th FIFA Women’s World Cup finals will hold from June 7 to July 7, with France up against the Korea Republic in the opening match at the Parc des Princes in Paris.

The Super Falcons will open their account in France against Norway at the Stade Auguste Delaune in Reims on June 8, before matches against the Korea Republic in Grenoble on June 12 and host France in Rennes on June 17.

N-Power Available Programs in 2019 And Requirements

N-Power Available Programs in 2019 And Requirements

S*xtape: How it got leaked — Singer Tiwa Savage

S*xtape: How it got leaked — Singer Tiwa Savage