The response of sacked Director-General of the Department of State Services (DSS), Lawal Daura, to Vice President Yemi Osinbajo, might be responsible for his removal.

The widespread media attention and outrage from Nigerians, as well as attempts by furious lawmakers to break into the premises, forced the security agents to grant access to the parliament.

Limitedly, the access was only granted to serving lawmakers. All other members of staff at the National Assembly, as well as journalists and other independent observers were denied entry.

The siege lasted until late afternoon when DSS operatives stood down after receiving reports that Acting President Yemi Osinbajo did not authorise the deployment and had fired the director-general of the secret police, Lawal Daura, as a consequence.

Presidential sources has disclosed events that led to Daura’s removal.

Quoted by newsmen, the sources disclosed that Osinbajo communicated his action to his principal, President Muhammadu Buhari before going public with the announcement but this was after the SSS boss was placed as a suspected mole in the security agency.

Although his activities suggests Daura was taking directives from Buhari, who appointed him, he is lately been suspected to be working for Senate President, Bukola Saraki.

“When the siege began, the acting president quickly went to action and was able to gather preliminary information of what was going on after which he invited some of the security chiefs concerned for a briefing,” one of the sources said.

Those invited include the Inspector-General of Police, Ibrahim Idris, who said the siege came as a surprise to him and the former DSS DG, Mr Daura, who is reportedly arrested even though his whereabout at the moment remained unknown.

“When Lawal Daura came in, the acting president asked him who cleared him to order operatives to lay siege on the National Assembly; and his response was ‘shocking’.

“He simply said it’s within his powers and that he is only answerable to the President and Commander-in-Chief who appointed him,” the source said.

After his response, Mr Osinbajo told his media aide, Laolu Akande, to immediately issue a statement announcing the sack of Mr Daura.

“The acting president also asked the National Security Adviser to hand over the sacked DG to the police for further investigation,” the source added.

Some Nigerians have said the presidency was using Daura as a scapegoat because the government plan to oust Saraki has failed.

Some are of the opinion that there was no way the sacked DSS DG who is the cousin of the president could turn around and betray his principal working for Saraki.

This position was also corroborated by the PDP who asked Osinbajo to “shed the idea of using” the sacked Director General of the Department of Services, Lawal Daura as “the fall guy” for Tuesday’s invasion of the National Assembly by security forces.

The opposition party maintained that the siege was with the “absolute knowledge and approval of President Muhammadu Buhari, Vice President Osinbajo, and the All Progressives Congress (APC).”

Also, the APC has accused Mr Saraki of masterminding the drama that transpired at the parliament yesterday. 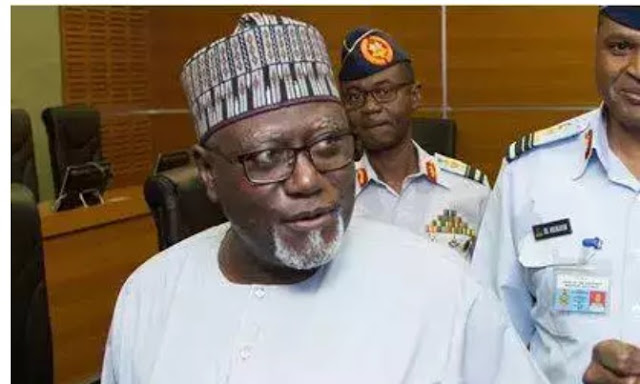