Rep. Barry Loudermilk (R-GA) compared Trump to Jesus by claiming that Jesus had more rights at his trial that Trump does during impeachment.

Rep. Loudermilk said, “The Constitution also guarantees that the accused can call witnesses to testify on their behalf. But the Republicans and the president were continually denied that right throughout this process. The sixth amendment guarantees the right of the defendant to face their accuser, but not only have the Democrats prohibited Republicans and the president from the so-called whistle-blower, his identity has been kept secret. Before you take this historic vote today one week before Christmas, I want you to keep this in mind. When Jesus was falsely accused of treason, Pontius Pilate gave Jesus the opportunity to, afforded more rights to Jesus than the Democrats have afforded this president in this process.”

Republicans are now comparing Trump to Jesus during the impeachment debate. #impeachmentday 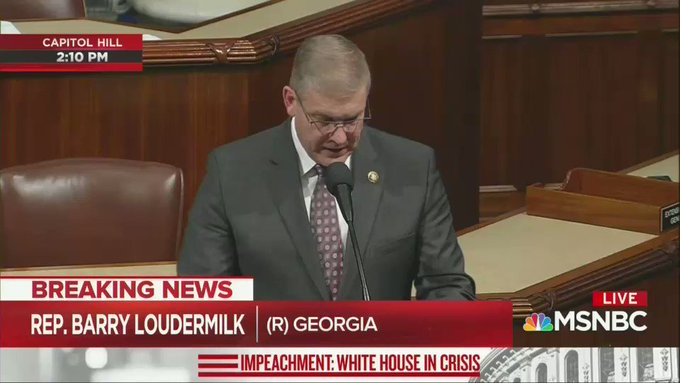 181 people are talking about this

Rep. Loudermilk knows that the House impeachment process is not a trial. It is an investigation. Republicans have continued to make the bogus claim that Trump is being denied rights by this impeachment process. Trump was invited to participate, but he refused.

Trump could call witnesses at the Senate trial, but Majority Leader Mitch McConnell is refusing to allow witnesses to be called.

Republicans are treating Trump like he is the orange messiah. Trump and Jesus have nothing in common, and if the president wants to question witnesses at his impeachment trial, he should tell Mitch McConnell to make it happen.

I Will Be Impeached, I Did Nothing Wrong - Donald Trump