PROF E. U IKONNE AN EPITOME OF PERFECT LEADERSHIP By Odoemena Chinonso

“Character is the foundation of leadership, people with distinguish characters become distinguish leaders”. Professor Eleazar Uchenna Ikonne, Vice chancellor abia state university among many has distinguished himself so far as the most consistent and effective vice chancellor the history of Abia state university has ever witnessed. A king does not sit on the throne from oblivion, he walks down through the aisle, under heat and cold before he attains his throne. This is not different from Prof Ikonne, after attending ngwa high school in Aba of abia state, he went further beyond the walls of his motherland to study optometry at Manila central university, Philippines. His return to Nigeria in 1985 was a prove of his love for the development of his country, served as consulting optometrist at the park lane general hospital Enugu. From 2010 to 2014 he served as the deputy vice-chancellor abia state university, then served as rector abia state polytechnic, aba on a rescue mission. He became the 7th vice-chancellor, Abia state university in December 2015. With a vivid retrospect, I recall the publication of the guardian news on the 17th December 2015, published at exactly 2:00pm by Gordi Udeajah. Where Prof Uche Ikonne promised to reposition the institution which has been suffering from a somewhat debilitating situation to effect a necessary change that would improve the fortunes of the 34 year old state university. His assumption into office gave birth to his idiosyncratic agenda of: “Our story must change”. Prof Ikonne on assumption into office expressed incessant worries that in spite of all the determined efforts in the past, the school still slumped from 87th position in national ranking in 2014 to 93rd position in 2015. He saw the debilitating situation as an academic jeopardy. He observed that the poor ranking of Abia state university gives her a poor external perception and tends to undermine the commendable strides and laudable inputs made by previous administration. Then he began to back his words up with commensurate actions. By opening up the university to national and international interactions, by focusing and addressing global parameters for ranking of universities which included conducive teaching( learning environment) research (volume, income and reputation), citations (research influence), industry income (innovation), and international outlook ( staff, students and research). On consolidation of good teachers and producing citation influencers, he drew a laudable discrepancy between Professors and “Distinguished” professors. Distinguished professors are those he noted had paid their academic dues by rendering comprehensive lecture on the field of their studies, as a defense of their professorship. This singular gesture threw many professors off balance as to redeem their academic prestige by paying their academic debts. This has also brought dignity to the noble institution, and has also attracted sensitization to his administration. Abia state university under the tenure of Prof E.U Ikonne can boast of having over 23 Inaugural lectures, an intellectual transition from a mere professor to a distinguished professor. On the aim of reigniting the prestige of the institution based on ranking, he restored the almost lost dignity by placing the institution on 35th best institution in Nigeria from 93rd position. And 3rd best state institution in Nigeria. On the sketch of international outlook which involves the students and research promotions. He assumed the position as the senior course representative, to students in all faculties and departments. Gave out his contact to every student, on the note of reporting every academic maltreatment they face, directly to him. These have been helpful to sieve out chafs from good seeds among the lecturers. Prof Ikonne as promised, has consolidated on the feats of his predecessors and has as well charted a new course which has instilled higher achievements for the noble institution. His administration was strategic enough to succinctly observe what his predecessors couldn’t use. And made use of the tools his predecessors had but never really saw it as a tool. Which suffice to say: that position in the hand of any other person, is nothing but just a glorified height, but in the hand of Prof Eleazar Uchena Ikonne, it became an efficacious seat of the Vice Chancellor Abia state university, uturu. Indeed “Our story has change!”. Author: Odoemena Augustine Chinonso Political science 400Level Email: [email protected] Blog: www.theagoratv.com Editor: Ogbajie Fortunate Chinaecherem 400Level Mass communication 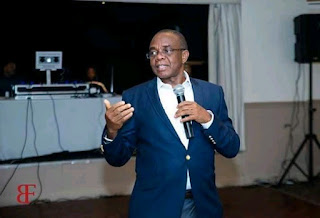 EVAN OGBONNA Goodwill Advise To The Youths Against Election