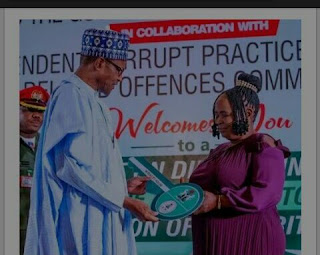 President Buhari presented awards to two public servants Bashir Abubakar and Mrs. Josephine Ugwu who showed high level of integrity and honesty in the course of their duties.
Ugwu, a former cleaner at the Murtala Mohammed International Airport, Lagos had on different occasions returned millions of Naira found in the course of her duty including the sum of 12 million Naira forgotten in the toilet by an airport user.
Also, Bashir Abubakar, the assistant Comptroller-General of customs once rejected 150 million Naira bribe offered him by drug traffickers to import 40 containers laden with tramadol. President Buhari however presented integrity awards to the two public servants.