Pope Francis apologized on Wednesday for his widely-viewed slap of a woman who had grabbed his hand on New Year’s Eve as he greeted catholic faithful.

The image of the Pope Francis slapping his way free from the clutches of his admirer was an instant hit on social media.

Pope Francis took time to apologize before his first mass of the year at the Vatican.

“We loose patience many times. It happens to me too. I apologize for the bad example given yesterday.”

Pope Francis had greeted children at the Saint Peter’s square and was turning away when the woman who had crossed herself then cried out something, pulled out his hand and almost caused him to fall. 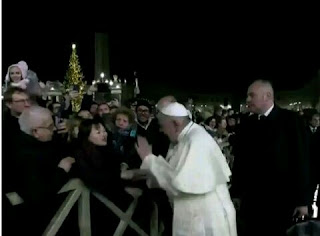 The 83-year-old pope grimaced before managing to break free by slapping her hands twice.

Twitter users were mostly supportive of the pontiff’s instinctive reaction

“HE IS HUMAN.. Been (sic) a Pope doesn’t make you immune to pain or avoid Reaction to pain.”  one typical comment read.

Fashion: Get your quality hair at QueenWendyClassics (Place Order Now)

Photos: Meet Obianuju the most charming girl who chose to serve her country as a police officer

(Poem) Words From A Bleeding Pen

Super Eagles: Meet The Talented Winger Who Is Prepared To Replace...