Florentin Pogba got an earful and almost got beaten by his teammates in Turkey after he stormed off the pitch in a rage with his team a goal down.

Florentin is the elder brother of Manchester United’s Paul Pogba and after a long career in France with St. Etienne, he moved to Turkey with Genclerbirligi in an 18-month contract.

The elder Pogba got into an altercation with his teammate in the 88th minute of the game and in a huff he pulled off his jersey and walked off the pitch leaving his team a man down.

According to Turkish media, he was confronted in the dressing room by his teammates who were angry, not only because it was a bad loss, it also means that Genclerbirligi is mostly likely going to be relegated from the Turkish top division.

Security officers and club officials reportedly had to intervene to usher Pogba to safety.

Genclerbirligi were a goal down and had already made their 3 substitutions and could therefore not bring anyone in to replace Pogba also making the prospect of an equalizer difficult.

The club has at the moment not responded to the incident, but it is very likely that Pogba faces some sort of repercussion for what he has done and could potentially have his contract terminated. 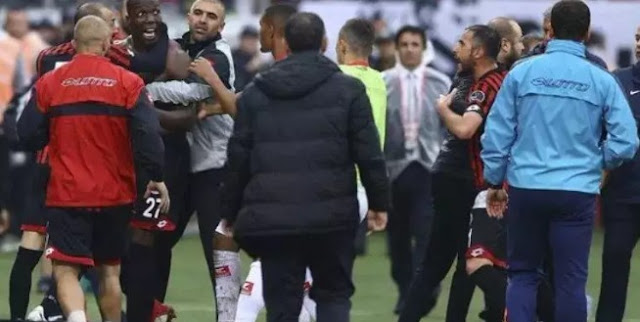