Osun rerun: US envoy reveals what he saw at polling units

Bray, who was in Osogbo to monitor the rerun election, described the process as credible.

The envoy said he did not observe any malpractices or violations of the Electoral Act in Unit 17, Ward 5 where the rerun election took place.

When asked about his observations, he told newsmen in Oshogbo: “The process has been credible.

“There was someone who tried to disrupt the poll. They quickly got the unit back to order. The Police and security services came together.”

On allegations that some voters were denied access to some units by thugs, Bray said: “There were things going on in six other units. I cannot comment on those things.

“I’m here as an observer today. All I can talk about is what’s in front of me. And today in Osogbo it’s working fine.

“No problem with card readers; people have been orderly.

“We have party agents here from all the political parties. I’m not hearing a lot of complaints. I haven’t seen any vote buying here.”

Bray added that he monitored the election today due to the importance the United States attaches to democratic processes.

“The United States is interested in democracy, because we’re a democratic country. So, we always support elections and democracy in Nigeria.

“I observe all the elections personally and I was here last week,” he added.

On the performance of the Independent National Electoral Commission (INEC), Bray said: “From what I’ve seen so far in Osogbo, INEC’s performance is fine.” 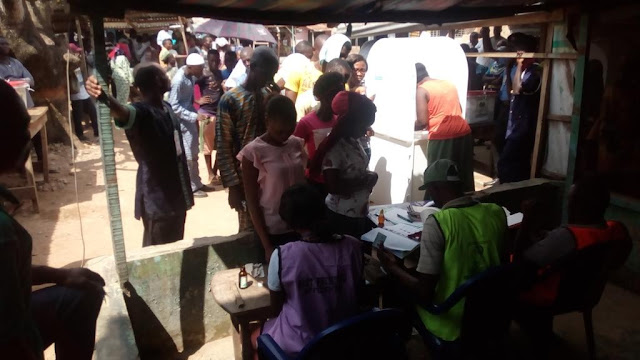