No other party will rule in Lagos except APC – Akiolu 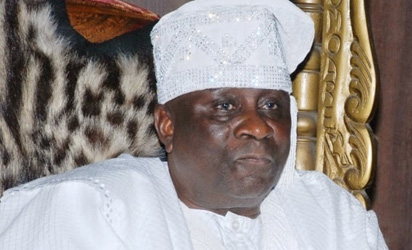 He made this remark yesterday in Lagos at the 11th Annual Hijrah Lecture and Commissioning of the new House of Assembly Mosque.

He said the new Mosque was unique especially as it was built inside the Assembly complex where Bills are passed into law. Oba Akioly also argued that it was not enough to build Mosque but that the custodians of the Mosque should be properly taken care of.

He also advised the custodians not to be involved in anything that would tarnish image of the religion.

Speaker of Lagos State of Assembly Mr. Mudashiru Obasa commended the congregation for donating fund for the rebuilding of the Mosque.

He described a Mosque as a Holy place to Worship Allah and supplicate to Him, adding that the custodians should do everything to ensure that it serves purpose for which it was built.

Governor Ambode was represented by the Commissioner for Home Affairs, Dr. AbdulHakeem Abdulateef who is the Chief Imam of the House of Assembly Mosque.

In his speech, the Chairman of the Muslim Community of the Assembly, Mr. Sikiru Osinowo thanked God Almighty for the completion of the mosque.

“We started the mosque project so that we could fulfil the purpose of our coming here. We have been Muslim Speakers, and God made it possible for us to build the new mosque during the time of the current Speaker, Rt. Hon. Mudashiru Obasa,” he said.

Man Utd boss Solskjaer: I’ll teach players to enjoy bench like I did

Man Utd boss Solskjaer: I'll teach players to enjoy bench like I did