The hoodlums who came in about five engine boats, stormed the security post located about 100 metres away from former President Jonathan’s residence in his hometown Otuoke by 1:30 am on Tuesday and attempted to take away a gunboat belonging to the military stationed at the creek beside the residence.

They were, however, resisted by gallant soldiers who engaged them in a fire fight

Fani-Kayode who was the Special Assistant (Public Affairs) to President Olusegun Obasanjo from July 2003 until June 2006.  has expressed his thought on the unfortunate incident on his twitter page.

The former Minister of Culture and Tourism of the Federal Republic of Nigeria from 22 June to 7 November 2006, had said that the attack on Goodluck Jonathan is the most dangerous event for the past 5 years in Nigeria. 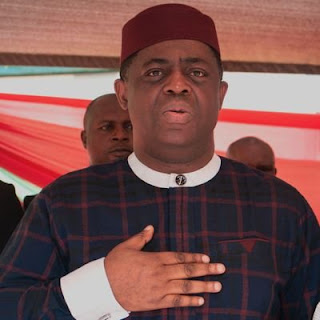 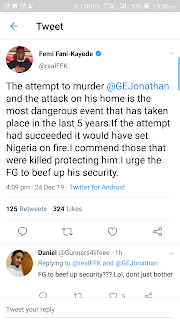 Sotitobire Akure Church: Member Opens Up On Why She Didn’t Attend Church Service On Sunday