– Nigeria face Zimbabwe in a pre-AFCON friendly on Saturday, June 8, before travelling to face Senegal in Egypt on Sunday, June 16

– The Super Eagles held an intense training session on Thursday, June 6, ahead of the game as the trio of Paul Onuachu, Kelechi Iheanacho and Samuel Chukwueze found the back of the net

Fans at the Stephen Keshi Stadium in Asaba were treated to an intense training session on Thursday, June 6, as the Super Eagles of Nigeria prepare for their pre-AFCON friendly against warriors of Zimbabwe.

For the first time since the camp opened, Nigeria had a full house as the duo of William Troost-Ekong and Odion Ighalo arrived the Super Eagles Golden Tulip Hotel camp in Asaba just hours before training.

With their arrival, Coach Gernot Rohr now has the full complement of the 25 invited players in camp ahead of the 2019 Africa Cup of Nations (AFCON) in Egypt.

However, the duo of Ighalo and Troost-Ekong were treated to light drills as they watched their teammates take part in a two-a-side training while goalkeeper Ikechukwu Ezenwa also watched from the bench.

Nigeria’s fastest goal scorer ever Paul Onuachu broke the deadlock in the first half as he brilliantly slotted home from close range after some nice footwork and stepovers. 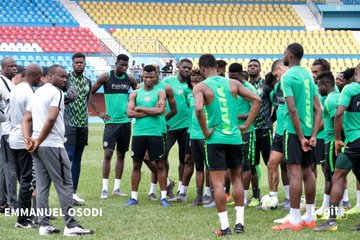 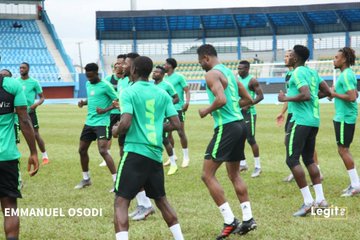 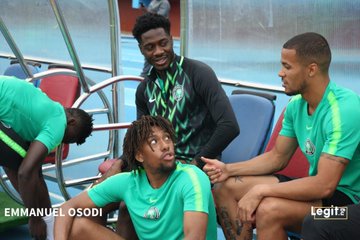 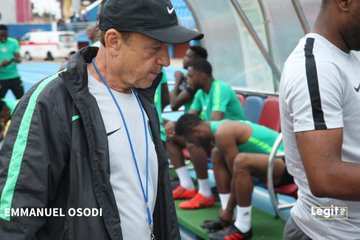 Fans at the Stephen Keshi Stadium in Asaba were treated to an intense training session on Thursday, June 6, as @NGSuperEagles prepare for their pre-AFCON friendly against warriors of Zimbabwe.

But at the resumption of the second half, team yellow got the equalizer through Iheanacho who chipped the ball past Uzoho to level matters. But just when fans thought the game will end 1-1, Villareal youngster Chukwueze dribbled his way to the box after a corner fell kindly to him before taking a left-footed shot which beat Akpeyi in goal.

That goal was the last kick of the game as Coach Gernot Rohr signaled the end of what was a very intense training session.

Team captain Mikel showed a glimpse of what to expect from him at AFCON 2019 as he displayed impressive long range passes to the delight of fans at the stadium.

The Super Eagles are expected to wrap up training today, June 7, before their pre-AFCON friendly against Zimbabwe on Saturday, June 8.

Kick-off time for the encounter is 6pm Nigerian time.

Earlier, Legit.ng reported that Ahmad Ahmed, CAF president, has reportedly been arrested in the early hours of Thursday, June 6 over financial and tax allegations.

The 59-year-old was said to have been taken into custody by the authorities at his Berri Hotel room in Paris where he is currently attending FIFA congress but has been released.

NAIJ.com (naija.ng) -> Legit.ng We have updated to serve you better.

EXPOSED: Meet The alleged real Owner Of The Mercedes Brabus Hushpuppi and Zlatan Ibile Showed off