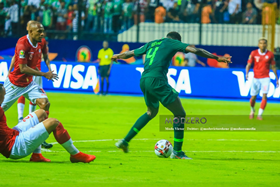 Leicester City midfielder Wilfred Ndidi has revealed that the Super Eagles have a slight advantage over the Indomitable Lions when both teams meet at the Alexandria Stadium on Saturday evening.

While the Super Eagles have been based in Alexandria for the past 18 days and played all their Group B fixtures in the oldest stadium in Africa, Cameroon had their first training session in Alexandria on Thursday.

Ranked among the top three teams in Africa by FIFA, the Super Eagles can go up against any opponents in Africa and Ndidi believes their familiarity with the Alexandria Stadium may give them an upper hand against Cameroon.

‘It can be but, I don’t think one hundred percent,” said Ndidi to Busy Buddies.

”It’s not really an advantage because this is Egypt, so, I think the only fact is that we’ve played three times on the ground and that’s the only advantage.

”And then the size of the pitch, they might have to get to know the pitch on the game day during the game so the only advantage is the fact that we’ve played there three times.”

Ndidi is set to return to Nigeria’s starting line-up tomorrow after he was rested for the first half of the 2-0 loss to Madagascar.

Frank Lampard speaks on where he would play Kante