The World Cup will soon be upon us.

In just a week’s time, the footballing world will be rejoicing at the return of competitive fixtures, with Russia hosting Saudi Arabia in the first fixture of the tournament.

It looks set to be a brilliant competition, with most of the star names set to make an appearance – barring any last minute injuries.

The tournament could be the last time both Lionel Messi and Cristiano Ronaldo both take part in, with the latter now 33-years-old.

They’re the two finest of their generation and a World Cup win for either would probably see them labelled the greatest of all time.

Ronaldo does have a European Championship to his name from 2016, with the onus more on Messi to try and enjoy some success with Argentina – he’s lost in three major finals.

Messi has been very coy on his country’s chances, stating that they’re not one of the big favourites and the bookies are saying the same.

But, who does the great man see shining in Russia? Well, Messi has given eight names for who he thinks will excel at the tournament.

He said: “Brazil have Ney and Philippe [Coutinho]. Spain have Andres Iniesta and Silva. Germany don’t have any one star but they are very solid.

“Belgium have [Eden] Hazard and [Kevin] De Bruyne. France have [Antoine] Griezmann and [Kylian] Mbappe. The tournament is full of very good players.”

No Ronaldo? Was always to be expected.

What is interesting is Messi’s assessment of Germany, stating that Die Mannschaft are much more of a team than other nations.

There’s also no mention of England or Harry Kane, but given how poor the Three Lions are in major tournaments, he can probably be forgiven.

The general consensus with Messi and Argentina is that Barcelona’s number 10 will have to emulate Diego Maradona to single-handedly lead them to glory. 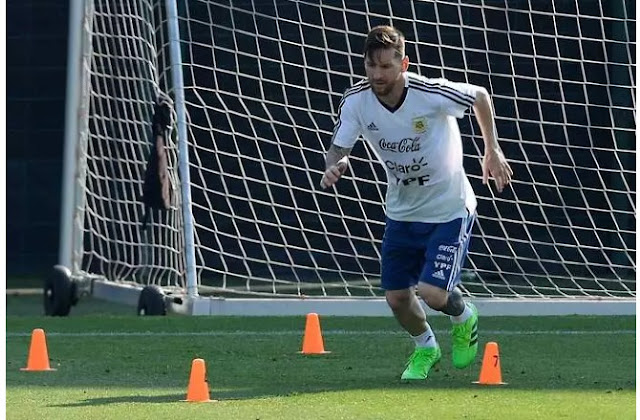