President Muhammadu Buhari during the presentation of 2019 Budget.

President Muhammadu Buhari said on Tuesday that he was not shaken by critics who called him Baba Go Slow because of his insistence that stolen money must be followed and retrieved, no matter how long it would take.

The President spoke in Abuja when he received a delegation from the Federal Capital Territory community on a Christmas visit to the Presidential Villa.

Making a specific reference to his 2019 re-election campaign, Buhari stated that the focus had not changed from what the All Progressives Congress outlined in 2015 for that year’s general elections.

He said his campaign focus remained on the tripod of fighting corruption, insecurity and improving the economy.

The President is expected to launch his re-election campaign on December 28 in Uyo, the Akwa Ibom State capital in the South-South geo-political zone.

The other zones, North-East, North-Central, North-West, South-West and South-East, will follow in subsequent dates.

Buhari said, “The party (APC) nominated me and I will contest. We are watching the Independent National Electoral Commission very seriously and we are going out very soon.

“We will go from geo-political zone to geo-political zone, to remind the people of our promises in 2015. There are three fundamental things. Security comes first, because you have to secure the country before you can govern it. Talking about what we have done regarding securing the country, the people of the North-East know better. The three fundamental things we campaigned with are still very relevant.

“On improving the economy, which we are still going to explore, we have done well in agriculture. Those who embraced farming are not regretting it. We have also addressed unemployment and we are very lucky. Through that, we are now attaining food security.

He added, “The third thing with which we will campaign is the issue of corruption. I told you what I did when I was in uniform. But now when I have to go by this system (democracy), where people have to be arrested and then prosecuted, taken to court and then with evidence, we will collect back what they had taken illegally.

“For doing that, people are calling me Baba Go Slow. I am going slowly, but whatever the case, I will not stop pointing fingers at those who have abused trust by taking money that does not belong to them.

“Fighting corruption. Yes, we are slow because the system is slow. It is not Baba that is slow, but it is the system. So I am going by this system and I hope we will make it.”

The community was led by the Minister of the FCT, Mohammed Bello.

The minster, while speaking earlier, praised Buhari for his performance so far, adding that the residents of the territory were proud of him.

Bello said, “We pray that God Almighty will continue to grant you good health, strength, capacity, ability and patience to continue to lead us to the promised land.

“On behalf of the FCT, we appreciate you for the good work you are doing for the territory. Just last week, you inaugurated for us a new airport terminal and so many road projects that are going on in Abuja.

“We feel highly delighted to be hosting you here and it is my honour on behalf of the FCT community to assure you that we are solidly behind you and by the grace of God, we look forward to you spending another four years in the State House.”

The Primate of Church of Nigeria (Anglican Communion), Nicholas Okoh, who was on the delegation, said he was elated that Buhari had regained his full health. 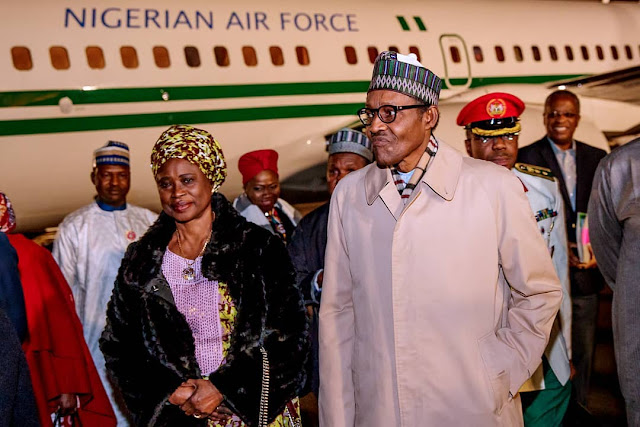 Gov. Ikpeazu charges Christians to reflect on essence of Christmas

Gov. Ikpeazu charges Christians to reflect on essence of Christmas