Natasha Akpoti an SDP Candidate took to her twitter handle:-
I’ve just been attacked, pushed to the ground & denied entrance by Yahaya Bello’s @OfficialAPCNg into the Political Stakeholders meeting organized by @inecnigeria in Lokoja.


Prof. Mahmood, Comm of Police were in there there & did nothing. 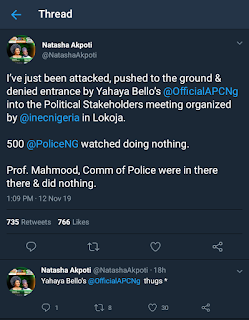 She alleged that the thug mostly wearing GYB – an acronym used to address the Kogi state governor, Yahaya Bello, also threatened that she would not be allowed to join the meeting taking place in the venue.
“On my way to participate in the INEC’s organised political stakeholders meeting …
I was attacked and harassed by the APC thugs,” Akpoti said. Breaking down in tears in the video,

Akpoti said that though there were lots of policemen, there were over 500 men from the security agencies in different uniforms, the thugs kept on attacking her both verbally and physically. According to her, the security operatives watched as she was assaulted without stopping the thugs from further harassing her. Reacting to Akopti’s claims, the APC chairman of the media and publicity committee in Kogi state, Kingsley Fanwo, said the party does not have thugs as alleged by the SDP candidate.