In January 2018, President Buhari said “I am not in a hurry to do anything”….

To put this in perspective, President Buhari has 13 months to go in his first term, so what does he mean by he is not in a hurry? well Buhari believes he will win the 2019 elections easily and have a second term, thus why hurry?.

Now this is not just optimism talking, the belief from is that Buhari is unbeatable at the polls, there is talk of “Kano votes” and massive crowds to illustrate the block votes that Buhari will always seem to secure.

Then there is the “Tinubu” votes which relates to the South West  votes that Buhari is projected to get from the South West Region to put him over the top. The maths does seems correct, President Buhari should get an easy second term, (without building a single new school and/or hospital).…but is this narrative true? Let us dig deeper,

Let us is look at Buhari’s performance in Nigerian elections from 2003 to 2011, it has not been pretty, let me summarize

In 1999, Nigeria zoned the Presidency to the SW, Buhari did not contest

What do you see?

A..First off all Buhari always gets double digit million votes in elections except when he runs against a candidate from the North.

C. In the 2011 elections, In Lagos State, controlled by the Opposition party since 1999, Buhari was only able to score 9.77% of the votes cast

4..In the 2011 elections, Buhari did not win any Middle Belt State of Kogi, Kwara, Nassarawa, Plateau and Taraba.

Summary? Buhari as a candidate from 2003 to 2011 was completely rejected in the South and Middle Belt of Nigeria.

In marketing terms, Tinubu re-positioned Buhari, re-branded and sold him to Nigerian voters as the solution for the problems they see around them. In 2015, Nigerians voted for what Bola Ahmed Tinubu sold to them. The product itself was unchanged but the messaging and branding changed, it worked.

2015 is what political scientists call a watershed wave election, anything tagged APC was elected.  Buhari not only won many Southern States like Lagos but he won key middle belt states like Benue and Kwara. In core PDP States like Imo, Buhari got an impressive 18% of the vote in 2015 (Buhari got 0.54% of the Imo Vote in 2011)

In Nigeria, The candidate with the most votes is declared the winner in the first round of voting, if he also gets 25% of the votes in two-thirds of Nigeria’s 36 states. So to win the presidency a candidate must get not just vting numbers but 25% of votes cast in 24 States. Buhari did not win in 2015 by “Kano Votes” Buhari won by finally getting the required 25% of votes cast in 2/3 of the 36 States.

This was the key success of the Bola Tinubu strategy, Buhari was repackaged so he could be sold, to a Southern electorate that had earlier rejected him.

These are the Swing States that will determine the next President of Nigeria,

If President Buhari support level drops in just 4 states he won in 2015, and he unable to gain 25% of voters in those States, then regardless of “Kano Votes” Buhari will not be reelected. (This of course assumes his opponent will get 25% in 24 States.)

Is the Buhari team comfortable with a 160,133 winning margin in Lagos? Or a 70,224 margin in Benue?  Was there really a wave? (Ondo State is within the margin of error in rigging)

I have done these analysis and have determined certain States are fragile for Buhari. After the PVC registration exercise I will redo my figures as registrations are the key determinations of my matrix.

The problem for the Buhari team is simple, without “ACN” Buhari reverts back to his support base of only Northern votes, There was no Buhari wave, there was a Bola Tinubu merger. Buhari has failed to actually build his own base away from his own core CPC political base. He has not reached out to the other voting blocs, if anything he has branded then as “5%”.

In essence, it will be the ACN voting wing of the APC conglomerate that will determine Nigeria CEO in 2019. What has Buhari done for the  so called “sophisticated” voters in the SW”? will they back him again in 2019?

This post can be read as a blueprint by the PDP or a wake up call to the Buhari team. Buhari can lose…he is vulnerable to a Presidential candidate from the North that will reduce his “Kano Votes” and a Yoruba Vice President that drops him below the 25% margin in the States like Ondo and Ogun.

So back to our opening sentence, Buhari believes he “has time”, the real question is do the Voters in the South West have time? 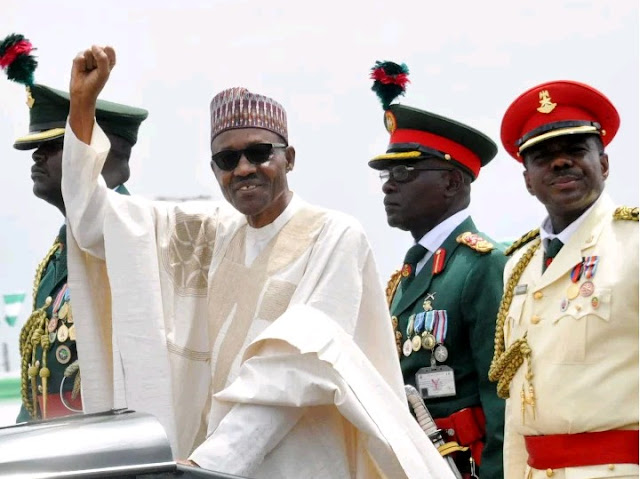