After more than eight days of hide-and-seek game between him and the police, who had surrounded his palatial Maitama residence, Kogi West Senator, Dino Melaye, finally showed up, and presented himself to the police in Abuja.

Dino, who had earlier vowed never to report to the police, willingly came out of his hiding, received the trio of Senator Murray Ben Bruce, Senator Atai idoko and House of Representatives member from Rivers State, Boma Goodhead, who had come to his house in company of his lawyer, Chief Mike Ozekhome.

Dino Melaye’s hide and seek game with the police however ended on a dramatic note as he slumped minutes after he gave himself up to the police.. Following his surrender   at his residence in Abuja at about 3.pm according to the police he was assisted to the police car by two plain clothes security personnel and driven to the police headquarters. On arrival at the police headquarters, he appeared very weak and could not walk by himself and had to be helped into the office where he slumped as he was breathing heavily.  He was said to be asthmatic. He was immediately lifted up to a sitting position while aA female assistant brought out an inhaler and gave him a couple of shots in his mouth.

The police in a statement issued later said “Senator Dino Melaye is currently in Police custody for investigation, and subsequently, taken to Police hospital, Abuja for medical attention and he is in stable condition. Investigation into the case of criminal conspiracy and attempted culpable homicide against him is on-going. The case will be taken to court on completion of investigation”

The lawmakers, who are strong supporters of Dino, apparently convinced him to report to the police given the weighty allegation of culpable homicide levelled against him by the force and find a way to prove them wrong, especially with the presence of Ozekhome, a senior Advocate of Nigeria, SAN.

A source present at the time of the incident, confirmed to Vanguard that no fewer than 50 policemen followed Dino and his colleagues, who drove the Senator in their private vehicle to the Police Headquarters in Abuja with a view to meeting the Inspector General of Police.

However, as Dino and his friends arrived the IGP’s office in Louis Edet House, they were told that he was unavailable and that they should rather report to the Federal Special Armed Robbery Squad, FSARS, in Guzape, near Asokoro.

Meanwhile, as a detachment of policemen was leaving Dino’s house to follow him to the dreaded FSARS, no fewer than 30 others in seven trucks, took strategic positions on Sangha Street where Dino’s home is and the adjourning areas.

Dino, who likens himself to the Biblical Elijah, had earlier vowed not to honour the police invitation, alleging that the police authorities had perfected plots to inject him to death and stall his political journey.

An aide to Dino, Bode Gbadebo, confirmed that as at the time of filing the report, his boss was still with FSARS, but said he did not know whether he would be released on Friday or not. It will be recalled that the detachment of policemen had stormed Dino’s residence since December 28, 2018, vowing not to vacate the premises until the embattled lawmaker surrendered himself.

The police had alleged that some supporters in the convoy of Senator Dino shot and fatally wounded a police Sergeant who was on a stop-and-search duty  and that he must answer to the alleged crime, which might likely keep him out for long if arrested.

If taken into prolonged custody, Dino might miss next month’s re-election bid to represent the people of his Kogi West Constituency. But Chief Ozekhome is expected to lead the fight to keep Dino out police custody. 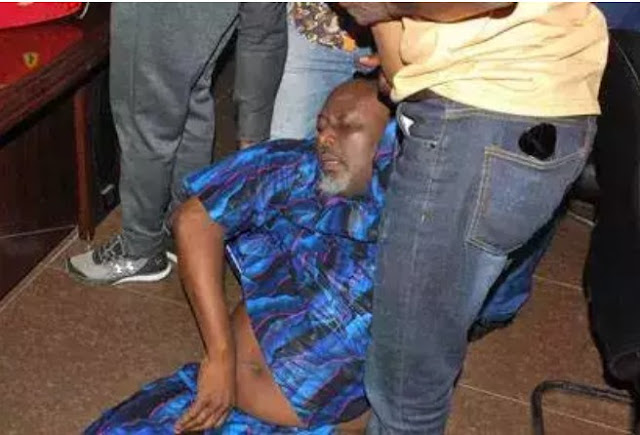 Just In: Pogba has been appointed as ambassador in an African nation