It was exactly on December 5, 2019, the court again set Sowore free confirming that he had setlled his bail terms.

However, there was a wind of change the next change in court when DSS operatives evaded the premises to re-arrest him.

At the late hours of 2019 the revolutionist on his twitter page, sent a new year that seem like he’s up again with the revolutionary struggles. 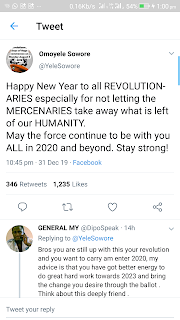