On Friday night, five candidates contesting for the vice presidency, engaged in a debate.

The debate was put together by the Nigerian Election Debate Group, NEDG, and the Broadcasting Organisations of Nigeria, BON.

Those who participated were:

Their responses and opinions drew mixed reactions from From so many..

Here are evaluations of individual’s speechspeech

YEMI OSINBAJO (APC) :
He sounded so confident and eloquent in his presentation, he was very logical and pragmatic in his countering of questions. His deliveries were based on experience and the fact that he was still occupying the position in which questions where asked on, gave him edge over other candidates.

He almost lost  concentration to the actual essence and kept hammering on the current government policies, and the parastatals they re currently managing.

Which was where he made mention of the government currently feeding 9.2 million children every day.
In his words, the current government saw fighting of corruption as a policy

In reply to Peter Obi’s statement on taking corruption as a policy, where Peter noted that “Fighting corruption shouldn’t be a policy, that you can’t close down your shops chasing criminals”

Osinbajo defended giving a reply that..
“if you allow all the criminals to steal all the business shops, they will be no shops”

Osinbajo was distracted with what the government are currently doing, other than what should be done.
Capitalizing of the 16years damage PDP caused to Nigeria as he claimed wasn’t the solution to the problem.

A good leader doesn’t dwell on past mistakes, but works painstakingly to adjust a pragmatic change for the future.

Which ever way, he represented well. And gave promising speech.

Peter Obi was high pointing the devastating situations of Nigeria with
Facts, Figures, Statistics and even comparative analysis.
They were cases he compared variably the politics of China, Malaysia with Nigeria’s, raising hypothesis that were very logical and work able.
He was bold and confident with words, his aura and carriage were second to none. He sounded like he was ready to compete and win.

He noted that the current government was really shirking from duty and doing the wrongs.
He evaluated with promising statistics how jobs and employment could be created within  the country to increase its growth domestic products.

However, his speeches were surmounted with high level of economic and political intelligence.

Umma as a political personnel, was with courage, though being a woman of few words she indeed had something striking to communicate.
She sounded very logical and not much of practical.

She sound like one who doesn’t know much of the issues in Nigeria politics. The nitty gritties of Nigeria politics were absent in her speeches. But she was confident in delivering the few she knew.
She wasn’t scared of voicing out. Statistically she wasn’t aware. But she made sure she reached the primary aspect of the political issues known to every common Nigerian.

He wasn’t much of a politician. He was analysing issues in politics as every person under the jurisdiction of Nigeria would have, his opinions were almost not work able, his ideas were filled with little or no command of actions.

From his speeches, he sounded like a leader who would allow sleeping bed lie, when issues get to gun point. He was much of complaining and not suggesting or evaluating.
He was confident, though lacked sophisticated use of words. His commands of words were weak and lacked much confidence and eloquence.
But he made his point.

She was speaking as a mother who saw every Nigerian as her children. Her concern was on giving each Nigerian a better life, she wasn’t speaking from her head, but from her heart. Her worlds were fired by passion, selflessness and hope.

She raised an issue of economy first and politics second, expressing her passion for alleviating poverty in Nigeria.

If one could judge from her speech, one would say ANN is more of an emotional party.

And that was all observed from last nights debate.

PS: These evaluations are perspective in nature, they do not by anyway represent the actual or serve as general principle of judgement for the vice presidential debate. Readers discretion is advised.

Odoemena Augustine Chinonso, the owner of the AGORA TV platform sends this in from Lagos, Nigeria.
www.theagoratv.com
[email protected] 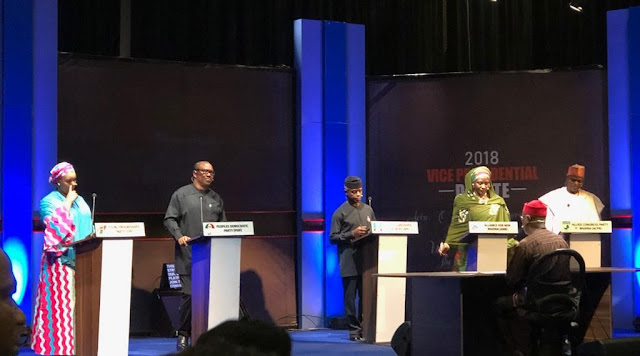 4 Uncommon Traits That Prove You Are Meant to Lead Others

4 Uncommon Traits That Prove You Are Meant to Lead Others