The Economic and Financial Crimes Commission, Kaduna zonal office has handed over four vehicles recovered from some management staff of the Federal University, Dutsin-ma, Katsina State, to the school authority.
Dutsin
Spokesperson for the Commission, Mr Wilson Uwujaren, in a statement in Abuja on Wednesday said that the vehicles were recovered following a petition by the Minister of Education, Malam Adamu Adamu.

Uwujaren said that the Minister alleged that former principal officers of the institution paid themselves several millions of Naira as severance allowances as well as engaged in suspicious financial transactions with a first generation bank.

Other offences against the suspects according to Uwujaren include procurement of personal items at inflated prices and violation of due process in the award of contracts, among others.

“During the handing over ceremony, the Kaduna zonal Head of the Commission, Mailafia Yakubu, said the vehicles were released based on a request by the university authority, so as to enable them run the affairs of the institution. 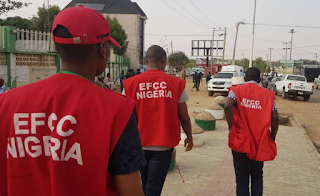 The handover is a testament that the fight against corruption is real and investigation is still ongoing and those involved will be prosecuted,” he said.

According to Uwujaren, the new Registrar, Aliyu Kankia, said that the release of the cars would ease the transportation challenges of the university.

Why I Dumped My Baby – Ondo Mother