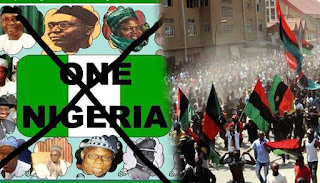 Since the inception of Nigeria as a unified nation of the south and northern protectorates with the colony of Lagos in 1914, Nigeria has witnessed a cacophony of struggles and chaos. The amalgamation of Nigeria, not only brought a mergence of two protectorates bottling up ethnic groups as much as the sands in the Sahara, but was also done in a somewhat cryptic manner.

Now many historians and scholars have asked: who were the indigenous pioneers of Nigeria’s amalgamation? Where there any at all? The Nigeria of today was as a result of the creativity of the imperialists – Britain, and with subsequent epochs in recognition; the highlight being the independence of the nation, it is still a wonder why even though Nigeria claims to be independent politically and otherwise, she still strives in the fruits of their colonial masters.

Which begs the question: devolution of governmental powers or disintegration of Nigeria?
Before delving into my argument and any counter-position, a vivid explanation of the aforementioned key phrases must be made.

Thus, devolution of powers is simply the separation or division of governmental powers between the federal/central and other component parts in a federal setting, in order to avoid tyranny and usurpation of powers if it were fused on just the central.

Devolution of powers is synonymous with federalism. On the other hand, disintegration of a nation means the clear cut and dismemberments of former member states of a nation from its federation. To be properly guided as to which of the two above defined is suitable for the present Nigeria, one has to retrospectively examine Nigeria, its past, present and possible future.

In a country that has witnessed a bloody civil war that dragged on for three and half years (1967-1970) with over six million of its citizens mainly from one tribe-Igbo killed; a nation that has from its independence till present, been subjected to different kinds of political and economic experiments  which include disturbing mismanagements and bewildering corruption, I am of the position that disintegration of Nigeria will be the better remedy given that over time, devolution of governmental powers has failed woefully.

As honorable noted by prominent indigenous writer, Professor Chinua Achebe in his book titled The Problem With Nigeria, tribalism or ethnicity is described as the major setback that has worked against national integration in the country.

Tribalism, now a jinxed word, has eaten so deep into the Nigerian system like a cankerworm. It has become so intricate and interwoven into every aspect of the nation and retrospectively speaking, there has been nothing effectively done to expunge it.

The clamor for disintegration is absolutely justifiable given the claustrophobic state of Nigeria which she has been battling with over time. Since 1960, one section of the federation- the North has governed under civilian rule or military dictatorship for more years than any other region. The south west having enjoyed little and the south east benefitting the least and worse still, not being given the opportunity to rule since the six months of Major-General Aguiyi Ironsi in 1966.

It is also pertinent to note that the tenets of the federation of Nigeria have only been a modernized form of imperialism. This is because the federal government has failed to observe the principles of federalism as a system of government which presupposes that each region or state shall enjoy its independence in overseeing its affairs without any extra constitutional interference. Why coerce different ethnic groups to remain affixed in one chamber – Nigeria, and with each enjoying minute liberty and power to oversee their affairs?

Nigeria was amalgamated without any iota of agreement from any part thereof and thus, having being granted independence, it would not be out of place for any region or tribe in Nigeria to want to get out there-from.

I hereby prescribe an amicable disintegration of Nigeria-state. If this is accomplished successfully, various state or constituencies will do much better than the present contraptions. This shall lead to maintenance of various cultures and ties amongst former states of former Nigeria; with each constituency enjoying the liberty to develop at its pace and not at the peril of another.

Say I more? The need for an amicable disintegration is imperative now as the earlier it is arrived at, the better for the every state encompassed by the sovereign Nigeria. A situation where fratricidal blood will soak the soil in the name of war is foreseen and will be appalling. It happened once, it could happen again.

Eke Onyekachi Theophilus is a candidate of Law, Abia State University. You can reach him via email ([email protected]) and on LinkedIn (Eke Onyekachi)