Cardi B and Nicki Minaj were involved in a physical altercation at the Harper’s Bazaar party at New York Fashion Week Friday prompting us to take a look at the messiest celebrity fights we have witnessed over the years.

Sometimes they’re good role models. Other times, they let their anger get the best of them. It just goes to show that everyone has a tipping point. Today we’ll be counting down our picks for the Top 10 Most Violent Celebrity Fights.

For this list, we’ll be looking at violent scenarios or altercations that celebrities found themselves in—or created themselves—in which aggressive physical contact was made. We’ve thus excluded Orlando Bloom throwing a swing at Justin Bieber. However, only one of the parties involved need to be famous or known in the public eye.

It’s unclear what exactly prompted this violent exchange, but you have to agree that it is a peculiar one. Restaurateur Guy Fieri is seen kicking his attacking hairdresser, Ariel Ramirez, away from his SUV. Ariel manages to land a few punches, and it’s clear he’s worked up about something by the way he shouts expletives and cries uncontrollably. Guy looks to be shocked himself, as it takes him a few moments to register what had just happened, before slamming his door shut. We can only speculate as to what this fight was really about, but someone close to Guy says it was alcohol-fuelled and that “It was just dudes being dudes.”

You know something serious has just gone down when even innocent bystanders get hurt. The brawl supposedly broke out after Drake sent back the bottle Chris Brown offered him with a rather… insulting message with it, boasting about his relationship with Brown’s ex, Rhianna. It’s hard to forget Brown’s physical abuse of Rhianna, and no one doubted that tension was high between the two rappers. From there, bottles were thrown, blood was spilled, and the club the fight took place in looked like a war zone. Some people left severely injured, while everyone left shocked as to what went down. Later reports had Drake claiming he wasn’t actually involved in the brawl, but that someone in his entourage, namely rapper Meek Mill, instigated the trash talking instead. Whatever the truth of the matter, Chris Brown himself suffered a nasty cut on his chin.

With another love triangle comes another fight. During Alicia Key’s performance at the MTV Video Music Awards, the two rockers got into a heated verbal exchange, before Rock slapped Lee. It’s unknown as to what exactly Tommy Lee said to Kid Rock to get him so fired up, but after being slapped, Lee tried to fight back. But luckily for them, and everyone watching, security was on them in a matter of seconds. The two had romantic histories with Pamela Anderson, and Lee reportedly had taunted Rock about his short relationship with her after the Motley Crue member had gotten back together with her.

At first glance, this powerful uppercut seemingly comes out of nowhere. Pitbull invites someone onto his stage during a live performance in Colorado, and immediately takes him down. So, why did this happen? Let’s take a step back and observe. Money is thrown on stage, and Pitbull knows exactly who’s responsible. He invites him up in a seemingly friendly manner, but the fan just doesn’t know when to quit, as he continues to throw money in Pitbull’s face. Well, judging from the video, the singer doesn’t appreciate it. He even tries to kick the downed man, with what looks like intent to keep going but is promptly stopped. Impressively, the rapper manages to keep his flow going during the whole ordeal.

This altercation started outside the Cobra nightclub after the MuchMusic Video Awards in Toronto. Celebrity blogger Perez had been known to blog about the Black Eyed Peas in a negative light and has even criticized Fergie’s fashion sense. After will.i.am confronted the blogger, telling him to stop writing about his band, Perez hit back with a homophobic slur, which is strange considering Perez is openly gay himself. Needless to say, no one was happy with this, least of all BEP’s manager, Liborio Molina, as he reportedly struck Perez in the face. Perez then took to social media, accusing will.i.am of the assault instead of calling 911. The assault charge against Molina was later dropped.

“Jersey Shore” is known for its raunchiness, and things tend to get out of hand quickly in a lot of the episodes. Take JWoww and Sammi for example. After a heated verbal fight in season 2, things got physical rather quickly, and it took other cast members to step in and break up the fight. Apparently, the tension never left, as they get into another fight in season 3. You begin to expect a fight every episode after that, and not just between those two, with Snooki getting punched in season 1, and the fight between Ronni and Mike in season 4. There’s no shortage of drama in this show.

Alec Baldwin is known for his distaste for the paparazzi, but some say he took things a bit too far when one photographer, Paul Adao, got a little too close to the star in Greenwich Village. Judging from the photographer’s expression, he is clearly in pain as Baldwin pins his arms behind his back and slams him down onto the hood of a car. We can understand the actor’s frustration, especially as he was walking with his wife – who had recently given birth. Still, the actor’s actions here may have been a bit extreme. Luckily, no arrests or charges were pressed against either of them.

Shia’s actions could be described as… eccentric over the past couple of years, and as a result, he found himself in a lot of unfortunate situations. One, for example, in which he reportedly ended up on the ground outside a bar in Vancouver, Canada while being pummeled on. Sources say Shia had either bumped into the man, or the man had verbally provoked the actor, and then the incident spiraled out of control from there. A bystander had stopped the fight before either of them sustained any serious injuries, but there just seems to be something about bars that get Shia worked up. Three years later, he was filmed head-butting a man after a patron made rude remarks about his girlfriend’s mother.

This was an incident no one had answers to for a long time, and raised a ton of questions and theories as to why Beyonce’s sister attacked her brother-in-law. The attack took place in a hotel elevator in New York, and shows an enraged Solange punching, scratching and kicking the rapper, while Beyonce just watches. The cause is still mostly just speculation, but sources say that Jay-Z was getting a little bit too close to another woman. Solange wasn’t comfortable with that, and acted in defense of her big sister. Beyoncé must’ve agreed with Solange to a small extent, hence her inaction during the incident, as well as releasing her album, “Lemonade,” which hints at her husband’s infidelity. What are sisters for?

A simmering feud between Cardi B and Nicki Minaj came to blows at a New York Fashion Week party on Friday evening. The scuffle began after rapper Cardi approached Minaj over “lies Nicki was spreading”. She was allegedly elbowed in the face by a security guard, before throwing a red-heeled shoe at Minaj, who appeared unscathed from the incident. After Cardi was escorted out barefoot with a bump above her eye, both stars took to social media after the clash. Eyewitnesses said the altercation took place on the first floor balcony of the Harper’s Bazaar ICONS party, during a performance by Christina Aguilera. 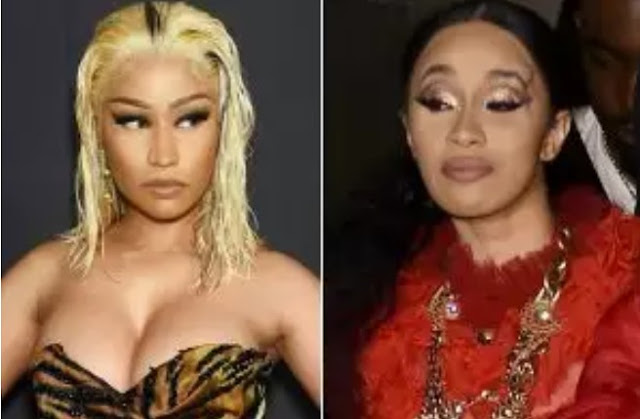