The Independent National Electoral Commissions (INEC) declaration of victory for candidate of ruling APC, Gboyega Oyetola, in Osun governorship election has been rejected by Sen. Ademola Adeleke, of PDP.

Adeleke, in a statement in Osogbo by his campaign organisation’s spokesperson, Mr Olawale Rasheed, said he would seek legal redress.

Adeleke, however, alleged that voters were deliberately refused access to polling points at gun points while those allowed to voting centres were forced to vote for APC.

He said PDP party agents were arrested, beaten up and shut out of polling centres while the roads were blocked to stop voters and observers.

“Applying all standards, today’s supplementary poll is a non-event as all norms of the electoral process are violated,” he said.

A statement by Mr Kunle Oyatomi, APC Director of Publicity, Research and Strategy in Osun, said PDP got their votes in the first election through manipulation.

Oyatomi said that nobody expected that the PDP would come second during the election, adding that most people in the state believed that it would be a straight fight between the APC and SDP.

“We have always known and have made ourselves clear before the election that the PDP had made elaborate arrangement to rig the election through the manipulation of the card readers.

” And it was this process that made them get the votes allocated to them in the first ballot.

” We like Osun people to understand that the run off votes went the way it did because the PDP was unable to manipulate the card readers this time around and fortunately the police thwarted their plot of buying and trying to use the PVCs of unsuspecting voters.

“That was why some of their leaders were arrested. So the PDP should look for other excuses.

“They attempted to win by fraud, they failed in the first round and eventually lost the rerun election,’’ Oyatomi said.

NAN reports that the election was declared inconclusive and a re-run ordered because the number of cancelled votes was higher than the margin between the two top candidates.

Adeleke led the race with 254,698 votes, 353 votes more than his closest rival, Gboyega Oyetola of the APC.

The margin was, however, less than the 3,498 votes in the polling units where voting was cancelled.

“Unfortunately, as the returning officer, it is not possible to declare any party as the clear winner of this election at the first ballot,” Fuwape had said. (NAN) 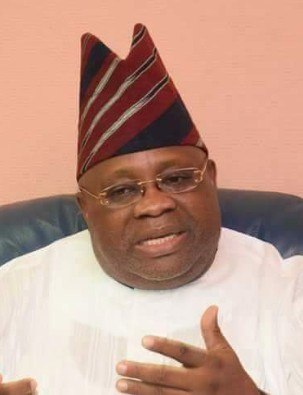